Mark Barrett, who is Founder and Director of Art & Cultural Enterprise of Yakkazoo, has lent a magnificent painting by Mavis Ngallametta to the Australia Council for the Arts, which now takes pride of place in the entrance foyer of the Australia Council’s HQ in Sydney’s Surry Hills.

As an extremely avid art collector, Mark Barrett knows talent when he sees it. But when long time friend and gallerist Martin Browne phoned Mark to let him know of an artist who was making waves in the arts community, Mark owned a new piece before he even knew it. Thanks to Martin Browne, an incredible Mavis Ngallametta piece Jabiru Creek (2014) was on its way to Mark’s private collection.

When Mark got his hands on Jabiru Creek, he knew it was something absolutely special. Mavis Ngallametta described the piece as “a beautiful reminder” of the place where she would often go to collect white ochre for her paintings. Originally a distinguished weaver, Mavis only recently tried her hand at painting on canvas and linen. She continued to pave her way into the arts world and had fast become a name to look out for. Earlier this year, Mavis was awarded the Australia Council Red Ochre Award for outstanding lifetime achievement.

When Mark learnt of Mavis’ Red Ochre Award for outstanding lifetime achievement, he felt it was only right to donate his Jabiru Creek piece to the Australia Council for the Arts. As Mark has such a vast collection of artworks, some of which also take residency in his own Yakkazoo HQ in Waterloo, he knew it was important to display the piece in a place where it would be recognised, loved and respected. It was the right timing, and it was Mark’s vital donation that has now lead to a profound Mavis Ngallametta piece being displayed in the heart of the Australia Council for the Arts.

I had heard of Mavis previously, but I’d never seen her work in person. I kept hearing her name throughout the arts community and knew she was a fabulous emerging artist.

I felt a bit emotional when I saw the artwork on the walls of the Australia Council. I love it there, and I think it’s such a great place to display such a beautiful piece. I’m so happy for the Australia Council, and I’m just so pleased they accepted my artwork and placed it in such a prominent position.

As a regular buyer of art, Mark goes to every art show and gallery you could imagine. He travels the world to visit art fairs and exhibitions, and hopes to continue supporting the arts community well into the future. Mark Barrett is now a Champion of the Arts for the Venice Biennale in 2019, and hopes to showcase more of his private collection along his journeys. 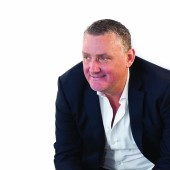 Founder. Initiator. Your Creative Counsel. I’m steeped in the worlds of art and business, and a catalyst for growing both. I founded Yakkazoo as your Creative Counsel: “creating at the speed of culture.” Creative services must be nimble, agile and versatile.

What Really Is Aboriginal Spirituality?